To recap, distributional semantics is the theory of meaning according to which word distribution correlates with word meaning. The contexts in which a word is likely to occur are constrained by what that word means. Models of distributional semantics are concrete implementations of this theory. A distributional semantics model (or DSM for the lazy writer) will give a meaning description for every possible word—or at least attempt to. This is a rather broad definition, and in fairness it could be applied to quite a number of very different things; but we'll get to that in future posts.

One thing to point out is that any computation that gives the conditional probability of a word given the sentence it occurs in can be construed as a DSM. If I have some metric that shows that the word "rabbits" is more likely than the word "clergymen" in the sentence "My pet ______ are adorable", then I have a metric that characterize word distribution; and if I assume that the distributional hypothesis is correct, I can infer that this metric also characterizes meaning.

Conditional probabilities, now, are probability scores that we have updated: something has happened; we know more stuff now, and we can say that all outcomes are no longer exactly as likely as they were previously.

This is a rather simple approach: we can just count stuff, be it colored balls or coin faces, and from that we should be able to characterize how likely are all outcome events.

Going back to our DSMs, we can use this notion of conditional probability to characterize word distributions. What is the probability that the word "rabbits" occur in a sentence, given that the word "burrows" also occurs in it? To answer that, I can just grab a large corpus of text, and count the number of sentences that contain the word "burrows", and compute the proportion of those that also contain the word "rabbits". I can do the same using "clergymen" instead of "rabbits". I can also characterize the distribution of these two words using some other observation: for instance, how the occurrence of the word "cathedral" constrains the distribution of "rabbits" and "clergymen".

Note: Let me be very clear: these are handpicked examples I chose for demonstrative purposes. This is not a representative sample.
For those of you enclined to hear about gory details, the corpus I computed my occurrences from is a 5Go mix of books (Gutenberg), subtitles (OpenSubtitles) and Wikipedia articles.

What is neat about this sort of approach is that we can extend it to any word. Don't trust me? Well, let's walk through one more: "dragons" occurs once with "burrows", and 4 times with "cathedral". In fact, we can even plot these observations in a 2-dimensional plane: let's have the x-axis be the number of times we observe a word in the same sentence as "burrows", and y-axis the number of times we observe it with "cathedral". That would give us something like the vectors in the following picture: 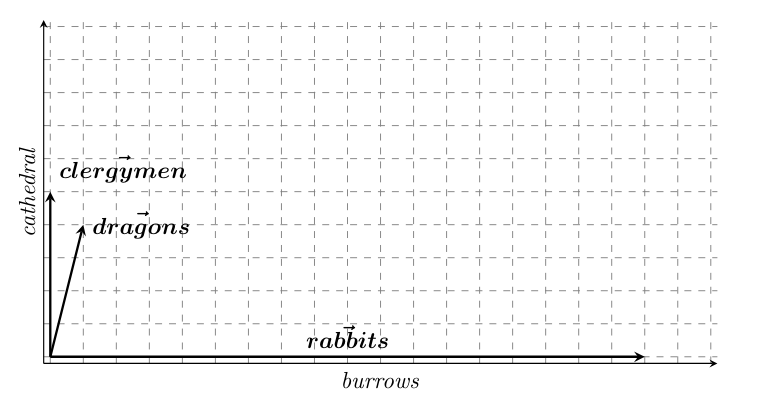 And let there be word vectors! We get representations of words, computed from their distributions, that correspond to points in some abstract space of (probabilistic) observations. That's where the "word vectors" I study come from—although to be fair, what I have presented here is a very simplified approach.

So... Are dragons more like clergymen that rabbits? At least, our 2D vectors in the image above suggest that it is the case. And you have to admit that, yes, it's more likely you'll hear about some holy bishop driving out a terrible dragon than Bugs Bunny doing so. In fact, this hints at a core characteristic of DSMs: they are usage-based and data-driven. What you get out of your representations depends on what data you've put into the model.

Another point to stress is that dragons are more like clergymen than rabbits only if we limit ourselves to the two tests we came up with. It's important to consider that we can extend our methodology to any and all words in the vocabulary. But that would lead to impractical high-dimensional vectors. How many dimensions, you ask? There are 5,008,462 different word types in the corpus we've used to compute our representations. We'd need 5,008,460 more dimensions if we were to take into account all the vocabulary data we have.

Note: There are other types of observation we can consider: for instance, in which documents a word occur. I can expect "rabbits" to occur more frequently than "clergymen" in leaflets from PETA, for instance. Document models of the sort have been proposed in the literature: in particular, one of the earliest word vector models, that of Salton et al. (1975), roughly corresponds to what we've described.

I'll stop here for today. Hopefully it wasn't too hard to follow. Next time, we'll look at a more recent (and therefore more complex) DSM architecture. In the meantime, here's some unrelated piece of entertainment for you.